Puppet Server in Docker on Windows

Running Puppet Server in Docker on Windows for Windows

Puppet Server, in Docker, on Windows

I’ve found that time to time, I really need a Puppet Server to do some testing. For example when I’m testing a Puppet control repository or that a module behaves correctly. Now I could use Vagrant to spin up a VM, or use a preconfigured Azure VM, but I wanted something that worked better with software development. All the cool kids are using docker so why not use docker to run Puppet Server?

Gareth Rushgrove did some initial work on creating puppet containers but it wasn’t until Michael Stahnke mentioned his puppetstack repository to me that I realised that this should be somewhat easy to do.

I blogged previously about Docker, Containers and Docker Compose.

So Michael’s original docker-compose file was geared towards Docker on Mac or Linux. In particular it referenced;

The docker unix socket is not available on Windows. So straight away this wouldn’t work on Docker for Windows but we could make some changes to get this to work.

The docker unix socket is being used by the gobetween-puppetserver service. GoBetween is small Layer4 proxy server which is being used to balance requests to Puppet Servers. As I was just creating a simple Puppet Server configuration, I only need one Puppet Server container which means I didn’t need a proxy server. So in this case I just removed the gobetween-puppetserver service entirely, and removed the dependency in the puppet service. This meant I could now create the docker containers and see what else broke!

So I started docker-compose and immediately saw some errors;

A quick search and I found other people had experienced this before, and in hindsight it makes perfect sense. The compose file used a volume mapping for the PostGres data;

Under Docker For Windows the bind mount volumes are owned by root, but PostgreSQL is expecting the owner to be postgres, and will fail unless this is true. But a forum post had a nice workaround. Instead of using a bind mount, use a volume. The volume is created within Docker’s storage, instead of a bind mount which is doing file redirection. That means the ownership problem is bypassed, but it means the volume has to be created before docker compose, and cleaned up as well.

So I changed the docker-compose file with;

This instructed docker to find a volume called puppetdb-postgres-volume and mount that in the puppetdbpostgres as /var/lib/postgresql/data.

So to create the volume we use;

And to remove the volume we use;

So with PostgreSQL fixed it was time to try the puppet stack again;

After all of the setup errors and warnings stopped being spewed out, eventually the logs were just showing various health check REST endpoints being hit e.g. "GET /production/status/test HTTP/1.1". So now it was time to see if the environment was actually working. I fired up Chrome and browsed to http://127.0.0.1, which is the endpoint for Puppet Explorer, and crossed my fingers … 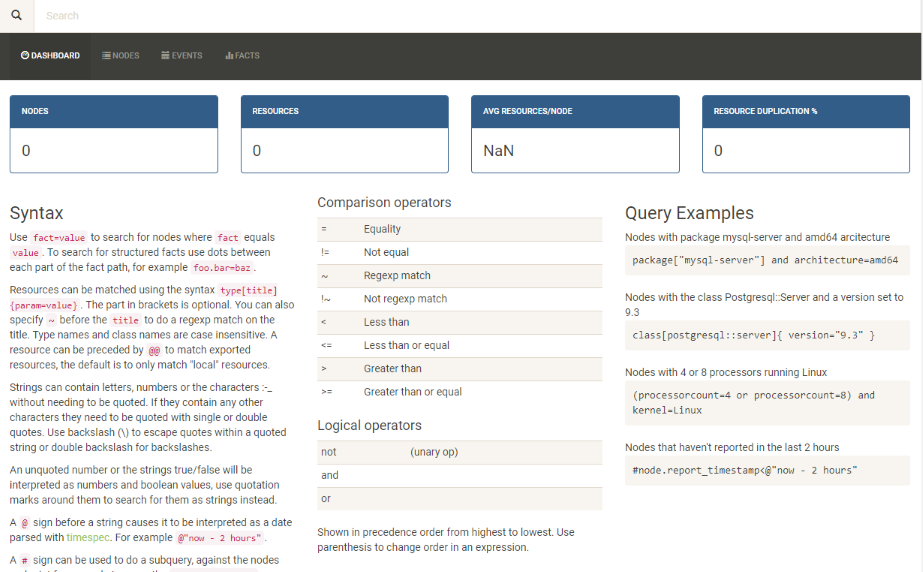 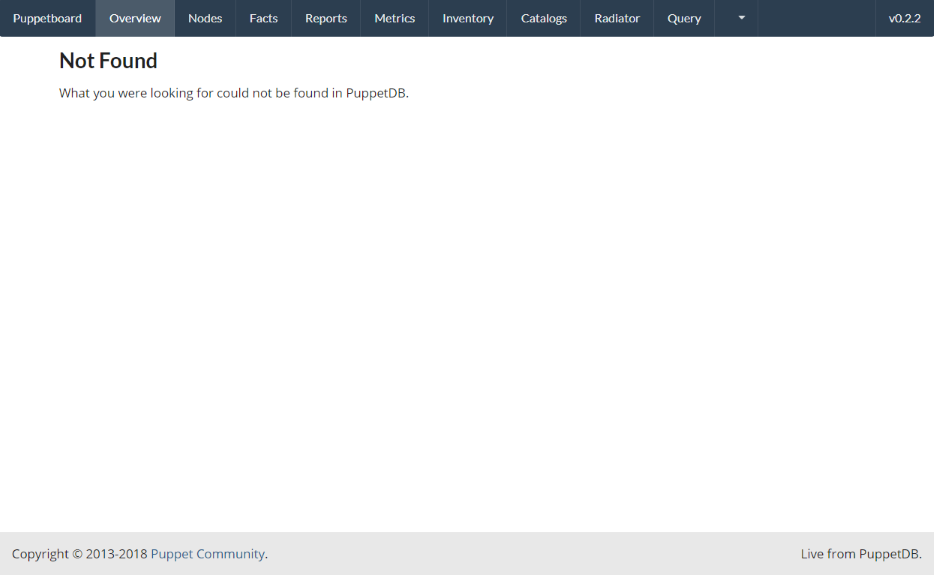 Somewhat success. As there were no nodes attached to the master, of course there was no data in PuppetDB. So the next thing I needed to do was attach an agent to the master.

I fired up a Windows VM, and installed a puppet agent using chocolatey (choco install puppet-agent). I then modified the hosts file, creating a entry called puppet to my laptop’s external IP Address. In my case it was 192.168.100.105;

I then executed puppet in agent mode to start the certificate process;

Well that wasn’t great. I could ping puppet and it resolved to the correct IP Address so perhaps it the TCP port wasn’t listening. I had a look at docker-compose file and noticed something;

The file says that port 8140 is exposed but there was no mapping so it ended up on some random port. Time to inspect the container

Okay, so port 8140 on the puppet/puppetserver image was mapped to port 32779 on my host. So I just needed to modify my puppet.conf to set that.

I created the file C:\ProgramData\PuppetLabs\puppet\etc\puppet.conf with the contents

And I ran puppet agent again

Success! and now Puppet Board was showing something useful 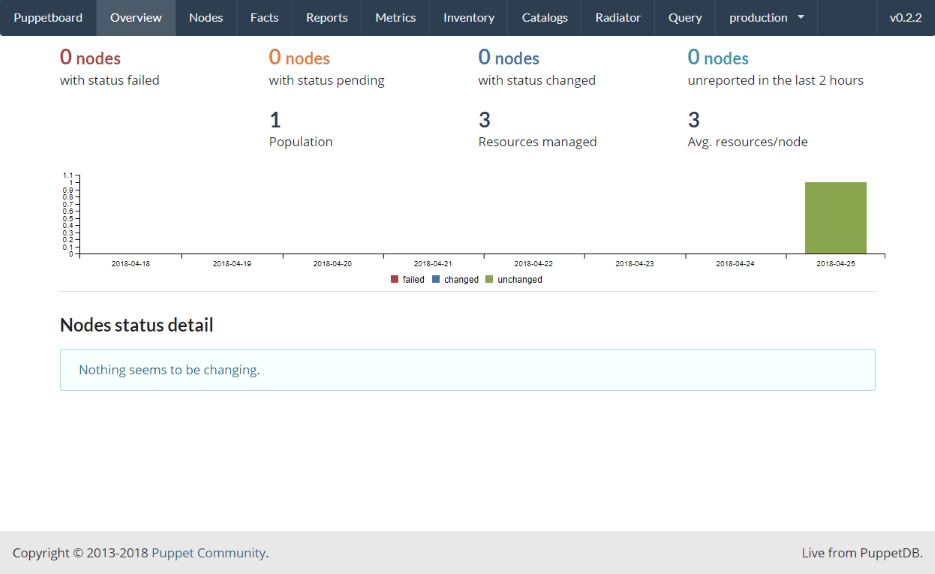 So now I had a master running on Windows (albeit on Docker on Windows) with a Windows agent connected. Now it was time to do something useful. The compose file exports the Puppet Server code directory as ./code which means I could just add files and folders on my local computer in that directory, and they would be seen by Puppet Server.

I created the standard directory structure of a production environment and installed a simple windows module, Windows Disk Facts from Dylan Ratcliffe (A fellow Aussie!)

We can see that it downloaded some new fact files which came from the windows_disk_facts module. So now this information should be available to view in Puppet Board 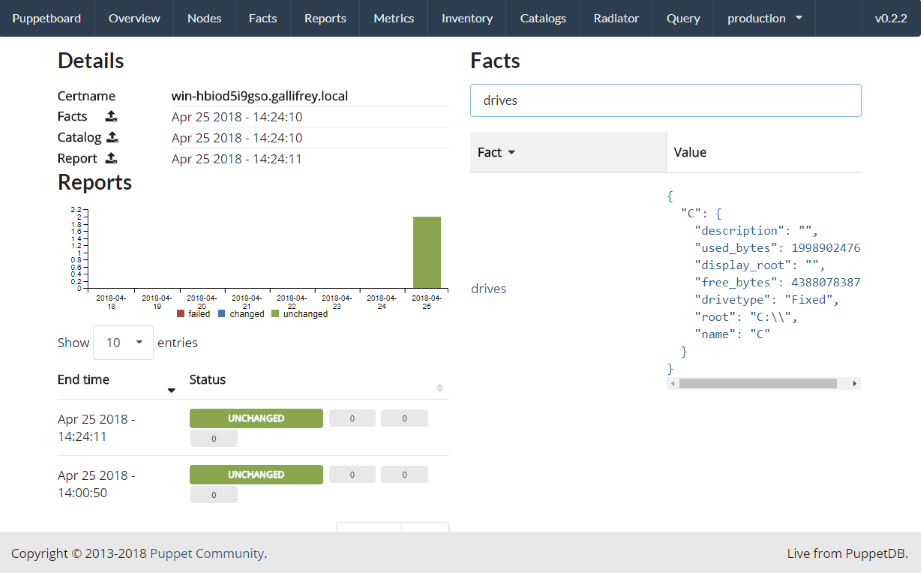 And sure enough if I browse the facts on my Windows agent, I can see the new fact drives is populated with;

So I now had a working Puppet Master setup running in Docker on Windows, with a connected Windows agent, and applying a standard puppet code layout which I could edit on my host computer and then test on the Windows agent.

And I could quickly create and destroy this environment as needed, on my development laptop without any need for internet connection!

The docker-compose files are available in my blog code repository.

There are still a number of improvements that could be made;

Use static port for Puppet Server

Instead of getting docker to dynamically assign a port for the Puppet Server, just statically assign it to 8140 by changing the ports to 8140:8140;

Use the load balancer but with TCP endpoint

I removed the load balancer for my needs, however gobetween does support TCP docker endpoints, as well as Unix sockets.

Use a Windows container for the agent

Now that we have Linux Containers on Windows (LCOW) it may be possible to add Windows Server Core container with Puppet Agent installed. Which means I won’t need to manually spin up a Windows VM for testing.